The bluish-white star Fomalhaut is one of the 20 brightest stars in the sky therefore it can still be seen from a good part of the northern hemisphere. It belongs to the constellation, Piscis Austrinus or the Southern Fish. A couple of degrees to the south of it, is the constellation of Grus, the Latin word for Crane. The shape of this constellation, in fact, looks like a Crane, and its stars are bright enough to be seen from northern latitudes lower than 25, under suburban skies.

Only 2 degrees east from to the Crane’s body, there is a lovely association of interacting galaxies known as The Grus Quartet.  A semi-urban sky and good transparency are enough to catch a glimpse of this group, at least in a 6” telescope.

Of the 4 galaxies that make up this group, 7552 is the brightest (10.6 Mag and 12.8 Surface Brightness) and therefore the easiest to see. It is also apart from the triplet and it did not fit in the same field of view as the other three using the widest FOV I could afford with 1.25” eyepieces in my telescope, about 1°8’ included some vignetting around the edges.
For the other 3 galaxies, I needed more than one night to confirm their presence. With low magnification, the sky still seemed too bright to see them, but once I popped out the 15mm Celestron Luminos eyepiece to get 100x, the background darkens enough catch these very subtle scratches of light. I had to cover my head to get total darkness around me and use of averted vision. Not an easy target, but after all, this group of galaxies are thought to be about 80 million light years from us. 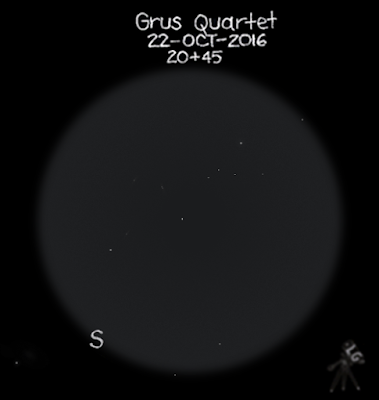