There had not been much activity under the stars, in part because of  other stuff that keep me busy (AKA Motorcycles), but also because I got bored of seeing the same star patterns in my little window in between the redwoods.  However, some time ago I decided it was time to get a nebula filter and following the recommendations of the prairie astronomy club 1, I bought my very first filter: a Lumicon UHC Filter. I think it is a first generation, as I bought it pre-owned from a seller in Cloudy Nights.

Some days later, I got the filter in the mail. A1.25” ring with a shiny silver finish. The box has a sticker that tells the following information about its transmission nebula lines: Oxygen-III 496nm 95%, Oxygen-III 501nm  93% and H-Beta 486 nm 96%  (this last and the percentages were hand written so I had to confirm with the technical specs). When I look through it in the daylight, everything looks greenish and I think I could see some flaws in the glass. I don’t think these will affect the performance at least with visual only. 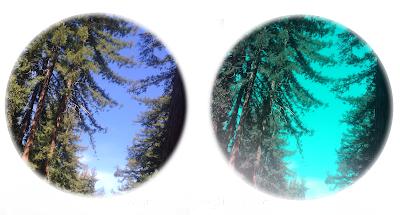 I tried it out a few nights later on every single object I could target in my tight window. It was mostly galaxies so I got disapointed really quick because it did not show any visual improvement, but a darker background and dimmer stars and the DSOs  themselves.
More time passed by. Clouds, rain, the moon or my back pain were in my way so not so much stargazing lately.  Clear night, moonless and not so cold so I decided to give it a try. Near the zenith I could see stars up to 5th magnitude with my eyes alone.  I think I got a good transparency, but a poor seeing (Polaris was flickering at low magnification). Seeing did not really matter because  I was not going to try for a planet. In fact, I can’t see planets from my location. They all hide behind the trees. 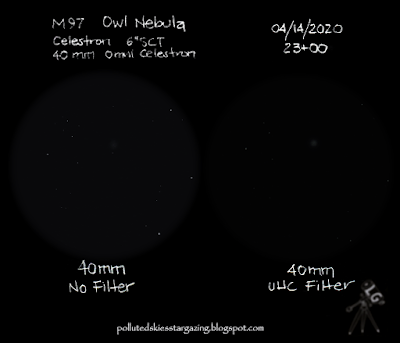 I waited until the polar bear  (AKA Ursa Major) was mostly out of the trees and went straight to Merak (βUMa). From there, it was just one step to M97. I have to mention that I also saw M108, The Surfboard Galaxy and the view was very pleasant.  Finally, I focused on M97. With my 40mm eyepiece I could see it like a ghostly circle. It was bright enough to be perceived with direct vision. This time, like the last ones, I could not see the eyes of the owl. I added more magnification, first with my 15mm Luminos grenade, but the light coming from the PN was too dim to fulfill the raise in magnification so I could only perceived it with averted vision. Then, I tried again 40mm, but this time with the filter screwed to the back of the eyepiece: background was definitely darker, less stars visible in the FOV but the PN remained intact.  In fact I think it looked brighter, but I know that was just a trick of the mind. Immediately, I tried the filter in communion of the 15mm but no luck. It was actually harder to see than when I used no filter so I abandoned the idea if using that much magnification with this specific object.

When I had spent enough time contemplating the nebula with both filter and no filter, I decided it was time for a sketch. First, I did an unfiltered sketch and then I used it as a template to put key stars on my filtered sketch. I tried to be as  accurate as I could, but since it was not a side by side comparison, it’s more like an approximation of the view. The mind and the eyes are deceived, specially in low light conditions, but what is important to know here is that the filter works with PNs. In the future, I will try to add more PNs to the records of this filter. My goal is to be able to check the southern skies where the most beautiful nebulaes are laid.

During this quarantine I wish you the most dark and clear skies!

The Sun and the planet

This was the last one of these rare events for more than a dozen years and despite running short on time, I managed to see it through my 6 inch telescope and a homemade solar filter (click here to see it). I know I could have seen it from NASA website live, but there is nothing like being under the sun itself with my own eyes on the eyepiece, looking at that tiny dot in a crusade across the giant yellowish fireball.

Here in the west coast of US, we could not see the whole 5 hours plus transit, but about half of it and I personally could only witness a half of that half because here in the San Lorenzo Valley, the sun rise had to overcome the height of the mountains. Despite that, the sky was in perfect mood to let the sun shine in all its magnificence so I had no excuse to miss the celestial event.

I started with my Omni 40mm eyepiece to get 37.5 times the image in the eyepiece and from time to time switched to the Luminos 15mm (100x). The low magnification eyepiece allowed me to fit the sun in the field of view while the Luminos allowed me to concentrate on getting the planet’s shape right. One thing I noticed is that the eye relief is even further back from the eyepiece. I haven’t studied the concepts of optics, but I imagine it is because our pupils are fully contracted.

Spotting Mercury was an easy task. There were no visible sunspots and the little dot was dark and round. To be honest, I have never seen the planet's shape before. One thing that blows my mind is to know that the temperature in that "dark zone" is minus 290F (-180C) while in the other side is 800F (427C). Something similar to summer here in the bay area in California: freezing in the morning but hellish in the afternoon.  One has to really love extreme temperatures to move to Mercury or California.

For those of you who missed it, you can hope to be still in shape for the next one in 2032 or go to NASA’s website and see a full HD recording of it. 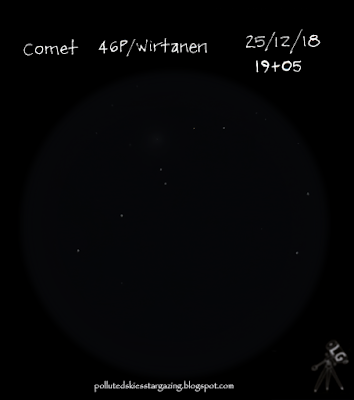 Christmas time is a synonym of  family, happiness and gifts.  And this year the gift was especially good for us stargazers. It brought back the comet 46P Wirtanen in a way that could be seen with just our eyes and a decent dark sky. I have to admit that I was very skeptical to the idea that it could be seen with the naked eye because until now, I had never been able to see one of those fuzzy blobs with just my eyes. There was always something in my way: my observation site was close to light pollution sources, there was moon light while the comet was there or simply the comet was too close to the sunset or sunrise.  This time was not the exception, the huge redwood trees declared their challenge to see from my backyard. Despite that, the night of the 12th I went out with my 10x50s Up Close binoculars and tried just for luck. What a surprise I had, when I discovered that the area where the comet was supposed to be was right in the middle of two tree tops and the gap between was wide enough to locate the comet. I followed the only two guide stars in my field of view: α Cet and λCet in the tale of the whale and drifted with my eyes to the east, just a couple of degrees left of them.  I could clearly see a particular fuzzy blob that I hadn’t see before. It must be the comet, I thought. Greedily. I pointed the binoculars to the spot to confirm it, and I was right. Voila! The comet was there, in the middle of two 3rd magnitude stars : ξTau and οTau in the back of the bull. What a good one!

With the moon growing, my chances of seeing the comet again were decreasing, so I had to wait until after the full moon to try  to spot it again and then sketch it.  Between some cloudy nights and rainy days the 25th arrived with the sky clearing up and as a child on a Christmas morning, I went to look for my gift at night. I took the telescope and some sketching pads and visited a spot a couple of miles from my house where there is more open sky so the chances to trip on a tree top were less. The sky seemed pristine but the abundant rain in the previous days promised to bath my scope as soon as the temperature started to descend.

Above me, I could see the milky way showering Cassiopeia and the leftovers of the Cygnus region. I set the scope and checked for the comet. It was supposed to be in the hat of Auriga. Somewhere, between the triangle formed by the stars Capella and the less bright ones Menkalinan and δAur. The constellation was right above the brightest dome of light pollution coming from Silicon Valley so I had trouble seeing the comet with just my eyes. Without a proper star chart, I had to navigate the area with my finderscope and wait until some blob or fuzzy appeared on the scene. It did not take too long till I found it. It had drifted from the center of the triangle towards the NE. By that time, my telescope corrector plate started to show signs of dew so I quickly traced some dots on the paper and in a matter of minutes a raw sketch was done. I wish I could have been more prepared for the dew, but this was what I had at hand and at least I didn’t let the year go without another sketch since I have been very limited with those this year.

The comet will be in the skies for a while, so if you haven’t see it, grab a pair of binos and go get it.  It is there for you!
To all my worldwide readers I wish you a Merry Christmas and a Happy and starry 2019 year.