I think everybody agrees that 2020 has not been a good year.  For us, there has been challenges and more challenges.  In September of this year, we moved to Bakersfield, CA because of the fires in Boulder Creek.  Thankfully, our stuff survived the fire and my telescope with it.  The smoke does not seem to have damaged the optics, but other than that, my scope smells like BBQ (or used to) everything else seems all right. 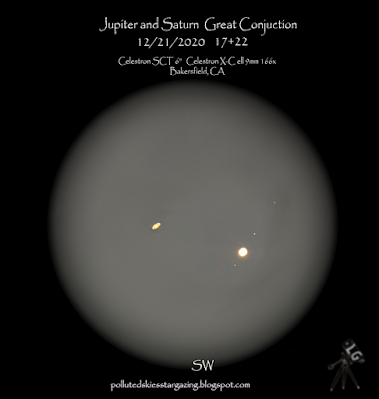 So, I was disappointed with my previous location because most of the sky was blocked by huge redwoods.  Here, we have plenty of sky, but not enough darkness. The air is also not as clean as in the mountains so transparency has not been the best.  I think this is a Bortle 8/9 zone and there are tons of ambient lights around at night. We rented an apartment so the whole situation has kept me away from the stars. Fortunately, the planets don’t need much darkness and since it has been advertised in the media, I could not miss the chance to check this amazing conjunction of the two gas giants: Jupiter with its Galilean Moons and Saturn with its rings.

My apartment’s entrance faces the southwest so I have followed these two for a while. The days and nights here in the San Joaquin Valley, seem to have few cloud activity so it was a good setting to enjoy this celestial show. On the 20th, they were so close that I took the scope out and gave them a try. Quite a view: Jupiter was exhibiting all its four Galilean moons and because of a background star, it appeared like there were five. We enjoyed the show for a while, try some pictures with the phone and called it a day. Today, on the 21st, I wanted to spot the couple still in daylight so I could take a better picture with my phone. I just shot at the eyepiece without any adjustments. The problem with the moon and the planets is that they are so bright, that the picture at the home looks overexposed. I am not much into Astrophotography so I try my best, but not with much effort.

At 5:15 local time (GMT -8), just a few minutes after the sun had set and still in daylight, I spotted the shy dot of light. It was so dim against the bright background that the phone could not detect it when I tried to get a picture. I pointed my scope  at it and check on the 40mm eyepiece. There it was: both planets in the vast FOV. Bumping up the magnification to 100, I could see Jupiter’s bands. I went on to 166x and 332x (with a 2x Barlow), but the seeing was bad. The planets were boiling in the FOV. My favorite view was at 100x, with a stable view that could give me enough details on the planets, but I decided to put up a digital sketch (using the phone picture) for the view at 166x. Maybe I should not say it is a digital sketch, but a touched up picture. Lol

Anyways, here it is and so is the picture I made with my phone of the scene. I could still split up both objects with just my eyes. They made a wonderful pair to wrap up as a Christmas present! 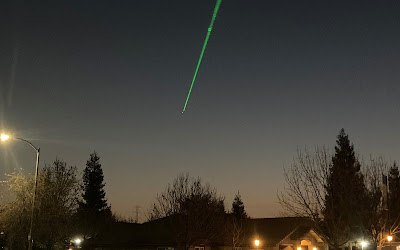 Merry Christmas to all,