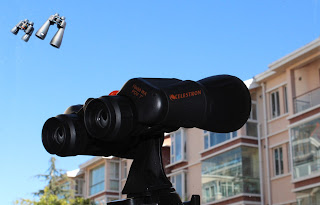 Last month I got a new pair of binoculars: Celestron Up-close 10x50. I have been using them a lot these days so I though it was time to throw a review in here. This time I don’t want to enter in tiresome measurements, but rather some descriptions of objects seen and perhaps there may be some room to compare them with my 15x70s.  My intention is not to compare this “low price” binos with other models, but rather than that, show that one does not need a big and expensive telescope to start in amateur astronomy.

2 things I like the most about these binoculars are their size and the large field of view (FOV). With only 1.7 pounds and almost half the size of the 15x70s (see the comparison in the little picture), they take only 1/4 of the space in my 40cms (15.7”) backpack. The large  FOV allows me to see extensive areas of the sky like the Orion’s belt and sword together or an entire small constellation like Triangulum.  The specifications call a FOV of 7 degrees, but less than that are truly useful. The field curvature makes it hard to discern details close to the edge and it has some vignetting also. I would say these binoculars have an effective FOV of about 6 degrees.

The first night with the binoculars was the 9th of January. I caught a handful of objetcs under my usual Bortle 5 skies. Orion Nebula was only a misty smudge involving two stars, but with averted vision I could make out a winged like shape. Some days later I gazed from a darker location and the winged shape was more evident with direct vision. M3 seemed like a fuzz ball embedded in a dim halo. M13 looked similar to M3, but brighter. On the other hand, Omega Centauri was a much larger cottonish smudge in appeareance like a soft cotton ball.
Other objects I got to see where M51, M81, M82 and M104. All of those were mostly specks of light visible with averted vision.

My last observation with these binoculars was on the 15th of this month. I went to a Bortle 3/4 area  (blue  zone in lightpollutionmap.info) about 7 kilometers north from the edge of the city. The sky at the zenith, north, east and west was considerable dark, but there was a huge dome of light pollution coming from the south. I managed to catch some more objects like the Flame Nebula (with averted vision), M78, Andromeda Galaxy with its satellite galaxies M32 and M110 (with  averted vision), Triangulum Galaxy and the very complex stellar area of Cone Nebula and Rosette Nebula. The  toughest targets I saw were M65 and M66 (Part of the Leo Triplet) which looked like almost impossible specks of light even with averted vision. Although the good skies I failed to see dim objects like M97 (Owl Nebula) and its companion M108 (Surfboard galaxy) and also the tough galaxy M74 in Pisces.

In middle of this dark zone, I took advantage of the good conditions and performed a sketch of M81 and M82, two galaxies located at 12 mly from us. I started adding and adding more stars around the galaxies until  I surpassed the binos FOV so the sketch you see it is not inside the true binos FOV, but rather an intent to show the feeling of looking at the sky with them.

Now, not everything is peaches and cream with these binoculars. The moon at night shows to many reflections inside the binoculars and the coma in brighter objects is bothersome and frustrating. I did succeed taking a picture of the moon in the daylight (which looks beautiful) to compare the FOV and magnification with the 15x70s.  Apparently, some of the biggest lunar features are visible, so there is a small chance to explore the moon with them. 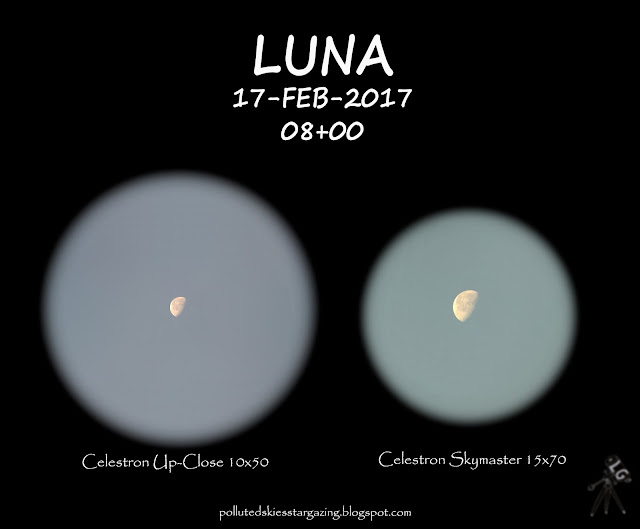 These binoculars won’t  replace a telescope, but considering the situation of many beginners, who do not know the sky and are on a budget, getting an inexpensive pair of binoculars to start with is not a crazy idea after all and much better (and even cheaper) than many of the department stores telescopes that end up in the Attic.

So, here is a short review of them and by the way I will keep doing sketches using them, I will add the link in the comments for more information. It is always a pleasure to share my observations here.