A region infested with globular clusters.

I began to conceive this project on a clear night in the beginning of May, when I was trying to add more Messiers to my sketch list; I found that there was a bunch of smooth globs in the constellation of Sagittarius. That night I got to see at least 8 globular clusters (GCs) included M4 in Scorpius, what a sight.

The true sketching journey started some days later, to be more exact on the 14th of May. There was bad seeing of 2/5, but excellent transparency and no moon (until 3:45 am) on a clear night. After some time of dark eye adaptation, I started to sketch at about 2:30 am. The view of the whole area was just breathless. I could clearly see the Milky Way in Sagittarius as well as some naked eye DSOs such as M7 and M8/M20.

I got to capture both M69 and NGC6652 in the same sketch. It was obvious that with an apparent magnitude of 7.70, M69 would seem much denser and brighter than NGC6652, with an apparent magnitude of 8.90, which seemed more like a little faint spot. It took me about three hours and 2 attempts to sketch the whole field of view (FOV) because there were a lot of stars in the area and I was not mentally prepared for that. The night was over at 5:30 am with a positive result: one sketch done but about 8 to go.

The next chance I got to try and complete my challenge was 6 days later, on the 20th of May. Seeing was slightly better this time: 3/5 and once again the sky had excellent transparency. This time I evaluated NELM (naked eye limited magnitude) at ±5.0. The Milky Way was easily visible through Sagittarius and Cygnus constellations.

With an average time of one hour per sketch I got 3 down from 3 am to just before the sun made the sky appear light blue, at about 5:20 am. M70 seemed like a blurry star of similar magnitude to the star HIP91713A (magnitude 7.75) and with averted vision it was possible to see some fuzziness around it.

There was something curious while I was sketching M70: I saw a faint spot with averted vision located at the edge of the FOV located just above 9 on the clock. First I thought that it could be something like an open cluster unable to be resolved with my binoculars but honestly until now I did not know if that was a DSO or just an “optical illusion” created by the dim stars HIP92397 and its companion of apparent magnitudes  9.05 and 9.70 respectively.

At about 4:00 am I was done with M70 and quickly went for M54 located about 3°northwest from M70 and 1°45’ to the west of Ascella (ζ Sgr) which in the binoculars seemed slightly dimmer than Kaus Borealis. M54 seemed brighter than M70. I think that by an inexperienced observer or under a more light polluted sky, it is difficult to be seen as a non-stellar object using just a pair of binoculars.
The jewel of that night would not come until about 5 am. M55 certainly seemed like a globular cluster with the characteristic cotton ball appearance in its entire visible surface.  In my opinion, this magnitude 7.0 GC is impossible to miss among the stars even with a moderate size telescope, but it is perfect to be mixed up as a comet nucleus because its size and “texture”.

With 3 targets sketched, this was the most productive night I had ever had; 4 sketches done and about 5 to go. Five days later, the sky was giving me another clear night and the opportunity to finish this quest. At dawn of the 25th of May I decided to conquer the last globular clusters in my sketching project: M75 and NGC 6723.

When I saw NGC 6723 I wondered why being so close to the others, it was not included in the Messier list. Then I realized that from a location above 45°Lat N, it does not rise high enough to be seen under an average clear night. I felt lucky to live at 26°Lat N where I still can see some southern targets pretty well.

At first I thought these 2 GC’s did not belong to Sagittarius. M75 was closer to Capricornius than Sagittarius and NGC6723 is just half degree above the star ε in Corona Australis. I used the star Dahib to star hop to M75. That star resembles the famous and pretty double star in Cygnus, Albireo. Finding NGC6723 was easy because Corona Australis was well visible in the sky.

While M75 seemed just like a blurry star with some fuzziness around if looked at with averted vision, NGC 6723 appeared to be the second brightest GC of all described above. My journey ended at 4:30 am when the clouds covered the whole area just when I had finished my GC sketching sessions.

Once I got these 6 sketches of 7 GC’s visible with binoculars in Sagittarius I wanted to create a collage of them but I was still missing the big boy: M22 and also M28, both located on top of the teapot.

I searched in my first sketch notebook and found that I had sketched M22 from my former Bortle 9 skies in Bogota, Colombia on the 29th of August of 2012.

That was one of my first sketches. I also found M28, made on the 7th of August of 2013 from the same polluted skies but using the telescope Astromaster 130EQ and a 25mm Kellner eyepiece. Despite the heavy light pollution and my inexperience as sketcher, I got a good picture of M22. It was bright and big enough to fight the LP of that big city. The dense core in M22 from a polluted sky seemed as big as a circle if a 4’ of diameter surrounding by a dim area much less contrasted with the bright background.


Processed and resized, trying to match with the Stellarium star chart of the area, this is my final result of the entire area: 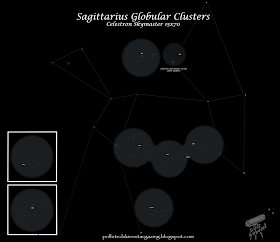 There are still more GCs to see in this area and from a darker location I’m sure I will be able to see them with the Binoculars. But for now, this is what I got and I hope I gave you a good reason to go outside the next clear night and try to check out these GCs.